Here are two nice pictures of my cat that I took with my iPhone, before he got sick and started to lose weight (you have to open images on another tab with WordPress to see them full size, since they always shrink images to make them fit the width of the blogs): 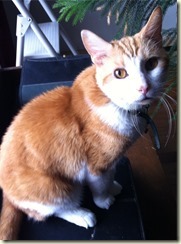 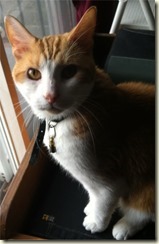 I went to see a vet last month who said that my cat was in a seriously bad health state.  She even told me if I would have not brought him to the vet he would have died.  She thought at first he only had a few months to live and she gave me a syringe and wanted to show me how to feed him that way, because cats in the state she thought he was do not want to eat and you have to force them.  So she came with a critical care pate to show me how to feed him, and my cat jumped on the pate she had brought him and devoured it.

So she changed her diagnostic because of this behavior, thinking that my cat probably decided he did not like the dry food anymore I was giving him, and started to eat less of it, then started to lose weight, which is exactly what happened.  My cat was still in a very fragile state, because he had lost a lot of weight, was very dehydrated, amorphous, cold temperature, etc.  So she gave him something to hydrate him, then told me to give him the critical care pate in small doses and mix the dose with water and give him this way.

So I bought a lot of that critical care pate, and I had to go back buy more twice, and gave him some whenever he was hungry, because it was important for him to gain weight, and his appetite grew with time, so much that he ate around 41 cans in a month.  He feels heavier and he has more energy to come to me for affection, and for more pate of course!

Yesterday I went to see the vet for the continuation of his treatment.  My cat has gained two pounds since his last visit, his temperature is normal this time, but he’s still very dehydrated, so she hydrated him again like last time.  She gave me medication for him for his heart and kidneys, and she told me she suspects he might have hyperthyroidism so she took a blood sample.  She called me later in the evening to confirm with me he does have hyperthyroidism.  So now he has medication to take for that and he will have to keep taking the other medication for a while because hyperthyroidism damages the heart and kidneys and the medication is there to prevent that.  So as long as his hyperthyroidism condition is not stable yet he has to take them.  She has changed his food and he does not need to take critical care pate anymore.  I just feel relieved to know what he has and that the medication will make him better.  I still have to go to the vet for the coming months to see how he fares with the medications.

I’m really heartbroken to hear that CCP Games have decided to cancel World of Darkness Online.  I’ve always wanted to play such an MMO in such a vampires-supernatural creatures dark setting.  Vampire the Mascarade: Bloodlines is among my favorite games and I was so looking forward the MMO version of World of Darkness.  I was planning to make two vampires, one Gangrel and one Tremere.

What bugs me is that CCP Games put time, money and people all these years on mediocre and failed games like Dust 514 and Valkyrie, instead of making World of Darkness Online their focus, they have kept spreading themselves with worthless projects.  And considering they purchased White Wolf that means that they own the IP, and therefore no MMO or games most probably will ever be made based on World of Darkness because of them.  So I’m really disappointed with their incompetence.

Let me put here the trailer of the game and show what could have been an awesome game:

I’ve never liked tea, coffee or herbal tea, even though I’ve tried many times.  As for coffee, I rarely drink it but when I do I prefer mocaccino coffee that they sell in small bags.  Because of my insomnia, I’ve tried all sort of herbal teas but I’ve never liked any of them.  Up until now anyway.  I found this herbal tea

at the grocery store.  I really love this herbal tea and I’ve gotten used to drink it often.  I’ve bought it these last months at the grocery store, but this month I could not find any, not even at the mall and the two pharmacies I checked.  It looks like I’ll have no other choice but to buy it at Amazon.ca from now on.

To be frank the reason I do not post readings anymore is because I’m not in the mood at all to use tarot or any oracle, or to do anything related to tarot.  I’m also not in the mood to buy more decks as well.  It’s been over a year that I’ve been feeling this way.  It’s not the first time it has happened, and it won’t be the last.  And I’ve seen people on Aeclectic Tarot Forums in the last decade going through these phases as well, who come and go, and come back later.

Personally I really like Diablo III, and after I started mode Nightmare with my 4 characters, I heard they were working on a new loot patch 2 which would make the loots better.  After you go through the game on normal mode, the main reason to play after is to get better gears, so I decided to stop completely playing my alts and wait for the patch, which took around 9 months.  It’s a good thing that I’m patient, and instead I played my hardcore monk that I had made.

The new loot patch occurred a bit before the launch of the expansion Reaper of Souls and Blizzard had for 3 weeks an extra 50% XP boost.  My characters were around level 33-34, and I was worried they would never reach maximum level, so I was really happy about this, and I used the boost in question to get all my 4 alts to level 60.  So I’m really proud to see that my characters are so high level.  With the expansion the maximum level has been raised to 70, but with them being at 60 already it will be easier to get them maximum level again.

I’ve played solely my monk and I’ve done the new act, which I find awesome.  Now my monk has reached maximum level of 70, and I’ve been doing bounties to raise my Paragon levels.  Right now my Paragon level is 29, and I’d like to get it up around 100-110.  I also prefer the new levels of difficulties that has come with the loot patch, the adventure mode, and the new Paragon system, because now all the alts share the same Paragon level, which means you just need to do it with one alt to level up Paragon, and all your alts have the same Paragon level too.

Here are signatures made with my characters, including my new born crusader, showing the classes, levels, etc.