I posted my poem The Radiant Brigit on the Order of Bards, Ovates & Druids forums for the short porm section and it won the contest.  I’m really happy about this.

When I was in my coven, we had to write a poem, and I wrote one about the Goddess Brighid. I think it fits with Imbolc that is coming, since it’s Brighid that brings Spring to us, and Imbolc is related to Brighid.  I had an image in my mind when I wrote that poem, an image I found on the internet years later, which I will share here as well.

She comes into the light,
Her naked feet caressing the snow,
And as she comes, bringing the light,
The snow melts under her feet.

She bears the Sun on her cloak
And Spring on her pale face,
A warm breeze plays with her blond hair,
Her smile full of promises.

Her radiant beauty makes Winter go away
And Darkness hides at the other side of the world.
Her green thumb is prosperous,
It gives life and heals.

With her fingers on her harp,
She awakens the souls and the spirits
From their deep sleep
And inspires them visions of beauty and of peace.

Since the fall of my coven, I’ve decided to focus on my interest into Druidry, and in the Order of Bards, Ovates & Druids in particular, and I bought years ago their bardic course, but never found the time to do it.  I’ve felt I needed to have a Druid Altar so I’ve been looking for a place to put it, away from my cat who could easily destroy it.  So I’ve decided to put it in the kitchen, next to my other things close to the door, so I went looking for small items.  I bought most of my items at The Magical Druid.

You have to open images on another tab with WordPress to see them full size, since they always shrink images to make them fit the width of the blogs. 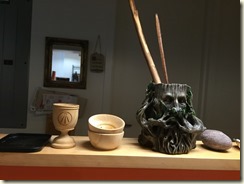 Now I’ll show things up close.  One of the items is part of a Mint-Tin Altar kit so I keep the rest of the kit in the red box. 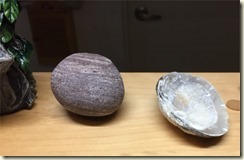 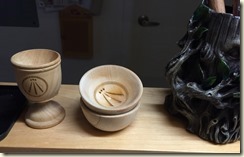 From the Fall anime season from Japan, one of the series I’m watching, Gakusen Toshi Asterisk, has a beautiful end credit song:

As for my Pagan life, the coven I was a part of has dissolved and no more.  Quite a few are moving away, for studies or work, so it was decided to end the coven.  It was quite a journey  and I learned so many things in the coven and it made me a better person as well.

I was aimless for a short while.  I’ve had interests into Druidry, and The Order of Bards, Ovates & Druids in particular, and I bought their bardic course years ago but never got around to do the course.  So now I’ve decided to make it my main focus for a while.

I want to have a Druid altar but my cat who still climbs, does not listen to me, destroys my stuff, chews and destroys my stuff, and plays around, it’s very hard to keep anything from Percy.  He even chew a box I had put the documents in, now it has a few holes, so I changed the place I kept the box and put it higher.

Since I keep a few things on a place next to my kitchen and the alleyway, like the autumn decorations, my Brighid statue, my witch/mojo bottle, a gargoyle and warrior in the entryway, I’ve placed them closer to the kitchen so I could use the rest of this small space for my Druid altar.  So far I put there my wand, my athame, a rock, my favorite candleholder,

I’ve already found a few items and bought: a Mint-Tin Altar, a Mini Chalice with Symbol (wood w/stainless steel and Awen Symbol), an Awen Box, an Irish Harp pendant.  I plan to add more items later, like a tree like that one, but now these will do.  As for the pendant, I’m inspired by the witch.s pouch concept so I plan to get “druid” pouches, one for each rank, so I plan to put the harp pendant in my bardic pouch once I get one.

One of the few downsides of Final Fantasy XIV, and the major disappointment, is their housing system.  They said private houses would be much less expensive, that Free Companies and private houses would be separated (but instead players compete and fight against Free Companies over the very few houses and wards that are available) and a long list of other things that are wrong with it, like the very few wards that they made.  I’m lucky because my guild was in the closed beta and at launch so they bought a medium house, and now that they’ve added private rooms in Free Companies’s houses, I bought one as well not a long time ago.  It’s pretty much the sole housing available for individuals right now unfortunately.

Anyway, here are screenshots of my room.  The grandfather clock makes a sound at every second or so, it’s really nice.  I plan to update this post whenever I make changes and add things to my room. 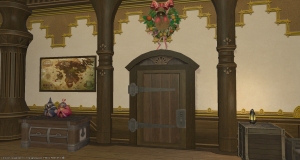 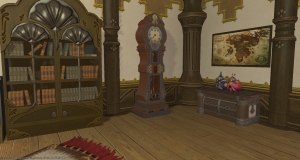 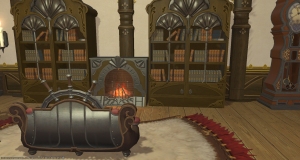 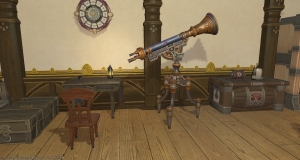 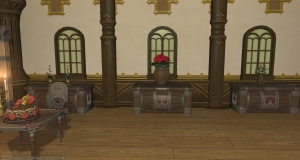 I want to wish Merry Yule to everyone

Since this year has been hard for me and depressing, I quit the dark setting of the MMORPG The Elders Scrolls Online to go back to a more cheerful setting MMORPG Final Fantasy XIV: A Realm Reborn. 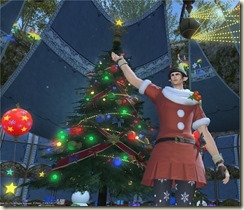 That is my character in the game Final Fantasy XIV: A Realm Reborn.

I really love spices cakes, it’s one of my favorite desserts, along with Pouding chômeur with maple syrup.  Autumn and winter are two seasons that are perfect time to bake and eat spices cakes.  I went looking for traditional spices cakes recipes for ideas for my recipe so I’ve been working on my recipe, adding things, removing some.  I used before nuts, but I’ve developed since food intolerance towards nuts so I removed them and replaced them with dried sweetened cranberries.  After that I tested the right amount of dried sweetened cranberries and I think over 1/4 cup the cake gets too sweet.  Allspice and nutmeg have both strong scent, so it’s important to only put in small doses.

I’ve been trying to translate it from French so bear with me.  I hope you like it, if you ever try it.

P.S.  Since I don’t like butter I use margarine for the recipe.

I got another black kitty, but this time I went to the SPCA because their pets are always supervised by vets and I did not want to lose that one as well.  He was too young though to be sterilized so I became his guardian for a month instead.  I bought him in october, but he’s still too young to be sterilized yet.

I did not dare mention it here because I was so excited about Merlin then he died a few days later.  I feared the same thing could happen to Percy.  But Percy is packed with good health and energy, and he’s a little imp.

This year has been tough for me and I got somewhat depressed.  Percy has brighten my days.

Here is a picture of Percy: 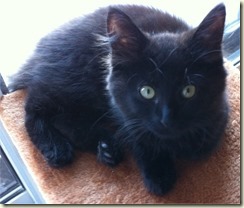 Here is his profile on Catster:

Merlin’s condition deteriorated rapidly yesterday, and he passed away right before the vet had any chance to treat him earlier today.  He was very fine last week when I brought him to the vet to get him vaccinated.  He was really sweet, adorable and affectionate, and I’m really heartbroken over this sudden loss. I’m really depressed right now.